Castle Hill Publishers are proud to announce the availability from its UK outlet of a new book by Italian revisionist scholar Carlo Mattogno (it will soon be available from The Barnes Review as well):

Inside the Gas Chambers

The Extermination of Mainstream Holocaust Historiography 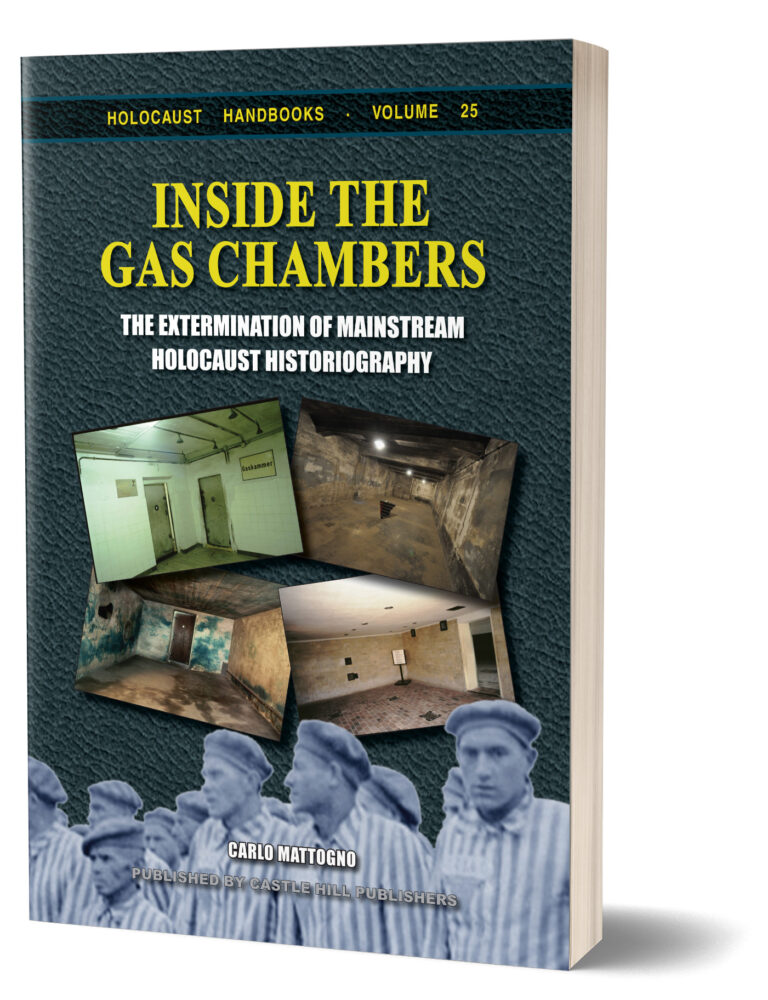 Since the early 1990s, critical historians have published a steadily growing number of carefully investigated studies on the so-called “Holocaust.” Hence the orthodox historians, usually paid by the government, were compelled to do something against the rising tide of revisionist arguments. Therefore, after a conference had been held in Germany to discuss the matter, an anthology appeared in early 2011 under the aegis of the German historians Günter Morsch and Bertrand Perz. It claims to refute the arguments of critical historians.

Indicative for this study is, however, that revisionist arguments are basically not address at all. Hardly any of the many revisionist works which have appeared over the past 20 years is even mentioned.

In the present book, Italian scholar Mattogno mercilessly exposes the embarrassing superficiality and dogmatic ignorance of these historians. Over and over again it become clear that their claims are in part utterly unfounded or are frequently based on the distorted and disfigured use of sources. Based on his unparalleled knowledge of the source material, Mattogno aptly reduces the theses of the court historians to absurdity. This book summarizes the arguments for and against every single gas chamber claim made for any of the German war time camps: Auschwitz, Belzec, Chelmno, Dachau, Majdanek, Mauthausen, Natzweiler, Neuengamme, Ravensbrück, Sachsenhausen, Sobibor, Stutthof and Treblinka. Even the mystical “Gas Vans” are covered plus the euthanasia centers at Bernburg, Brandenburg, Grafeneck, Hadamar, Hartheim and Sonnenstein. This is the most comprehensive and up-to-date summary of revisionist knowledge.

By means of this book, mainstream Holocaust historiography has suffered a defeat which comes close to its intellectual extermination.

This is the book with which it all started: Skepticism about the claims that the wicked Nazis mass-murdered people in homicidal gas chambers. It took a leftist French political prisoner who suffered through two German war-time concentration and  forced-labor camps to get the ball rolling: Ulysses’s Lie Holocaust revisionism began with this book: Frenchman Rassinier,…

Once upon a time, a father and his son set out in shining armor to slay the wicked dragon, that is to say, to once and for all refute those evil Holocaust deniers… They wrote a book which appeared in print on July 15, 2016. On that very same day, July 15, 2016 (today), the…

Long out of print, this revisionist classic, a deconstruction of the “Auschwitz Myth,” is finally available again – in a new, slightly revised and corrected edition. A review on Amazon says about it: “Now this book is a breath of fresh air on the subject of the Holocaust! Devoid of emotionalism and clinical in its…