Castle Hill Publishers are proud to announce the publication of Udo Walendy’s classic work on the outbreak of World War II in a newly translated and slightly revised edition:

Truth for a War-Torn World 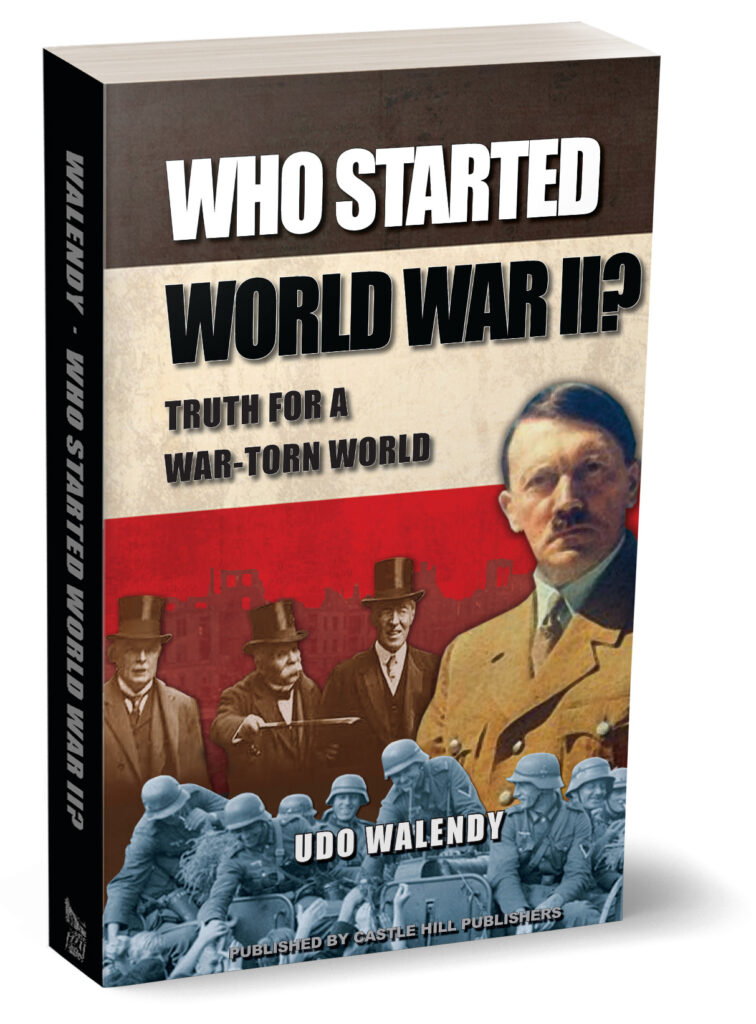 Nowadays the Second World War is frequently called the Mother of All Wars, the ultimate war of Good versus Evil. The roles are invariably allocated: Hitler and his Nazi henchmen as the absolute evil, and the Allies as the liberators, the saviours of mankind. Never mind that Stalin fought the war together with the West, even though in 1939, when the war broke out, Stalin had already killed millions, whereas Hitler’s victims counted “only” a few hundreds at most.

During the past decades, Hitler’s spectre has been raised repeatedly by politicians trying to demonise some country or some political leader in order to mobilize the masses for war, be it against Slobodan Milosevic Hitler, Saddam Hussein Hitler, or Mahmoud Ahmadinejad Hitler. In Palestine, Hitler and his “Holocaust” have served in one way or another as a justification for every aggression perpetrated by the State of Israel.

And so the world stumbles from one war to another, and Hitler still gets the blame. It is about time to end this perpetual war propaganda for the perpetual instigation of more wars. And that is exactly what Walendy does in the present book: proving that the clichés about the Mother of All Wars are profoundly wrong; that the Second World War was not a Good War at all; that simple Black and White, Good and Evil patterns do not fit here.

For seven decades, mainstream historians have insisted that Germany was the main, if not the sole culprit for unleashing World War II in Europe. In the present book this myth is refuted. There is available to the public today a great number of documents on the foreign policies of the Great Powers before September 1939 as well as a wealth of literature in the form of memoirs of the persons directly involved in the decisions that led to the outbreak of World War II. Together, they made possible Walendy’s present mosaic-like reconstruction of the events before the outbreak of the war in 1939. This book has been published only after an intensive study of sources, taking the greatest care to minimize speculation and inference.

Shortly after its 1964 initial publication, the German authorities put this work on their index of banned books, claiming that it was too dangerous because historians could only contradict it, but not refute it. After a legal battle lasting decades, the book was released in 1995 by the German Supreme Court. Future historical research will amplify the facts compiled in this book, but the defenders of “petrified propaganda” can no longer claim they are non-existent or irrelevant.

The present edition has been translated completely anew from the German original and has been slightly revised.

How long does it take Amazon to ban a book they hate? We tested it. On April 16, 2021, a new book of ours was put into international distribution, and on the same day it also showed up on Amazon.com for sale – until yesterday, April 30, 2021, when the page was removed. So here…

We’ve long wished to offer our own edition of this excellent book to our customers, and now we can! We’ve struck a deal with the author to be permitted to published a new edition, improved mainly in terms of a better layout and a higher image quality for the more than 100 illustrations accompanying this…