Castle Hill Publishers are proud to announce the publication of the first ever revisionist monograph on the Holocaust written by a British author. Among other interesting information, this book also contains trailblazing information derived from WWII Bletchley Park decrypts of secret German radio messages sent from various concentration camps to the SS headquarters in Berlin. The world’s largest book retailer Amazon says that this is the “#1 New Release” among new books on the History of the Holocaust: 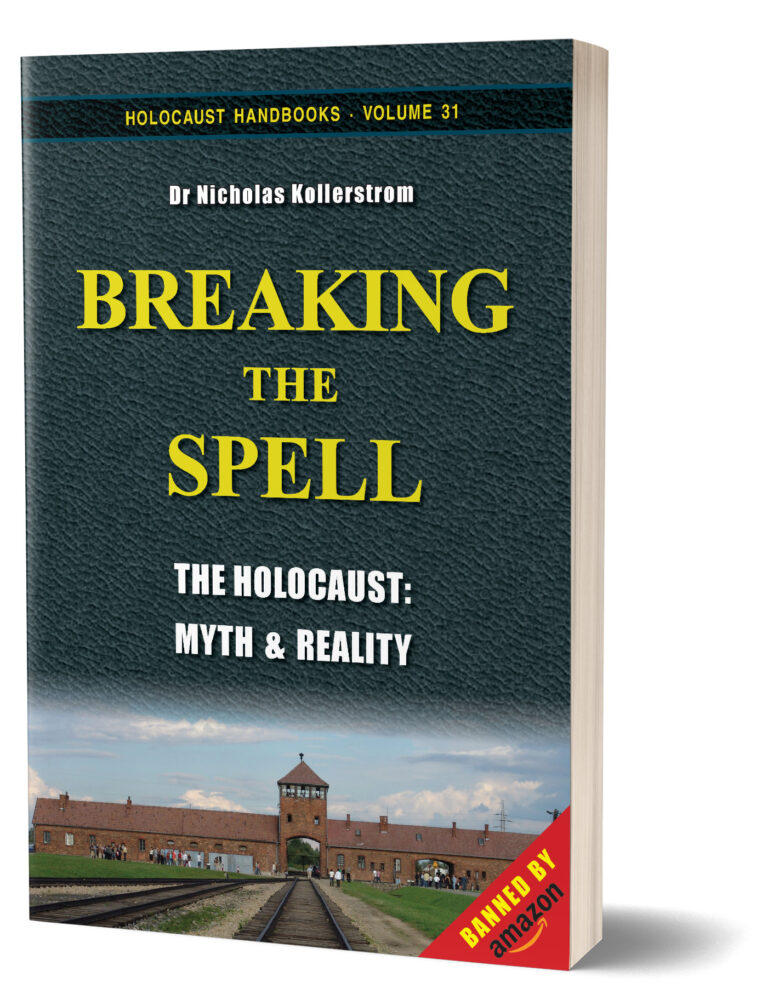 In 1941, British Intelligence analysts cracked the German “Enigma” code. This undermined the German war effort – but also threw new light on day-by-day events in the Nazi concentration camp system. Between January 1942 and January 1943, encrypted radio communications between those camps and the Berlin headquarters were intercepted and decrypted. Oddly enough, historians have largely ignored the information furnished in these intercepts relating to “arrivals,” “departures,” recorded deaths and other events at these camps. The only reasonable explanation for this embarrassing omission is that the intercepted data seriously contradicts, even refutes, the orthodox “Holocaust” narrative. The revealed information does not expose a program of mass murder and racial genocide. Quite the opposite: it reveals that the Germans were determined, desperate even, to reduce the death rate in their work camps, which was caused by catastrophic typhus epidemics.

Were the British here hoodwinked by the Nazis, as some historians to this day try to claim—or is the truth both simpler and more shocking?

In 1988 and 1991 forensic studies threw light on the question of whether or not the claimed gas chambers at Auschwitz had served as slaughter houses for hundreds of thousands of people. Both studies had concluded that the only facilities where Zyklon B gas had been used were hygienic rather than homicidal, killing bugs rather than Jews. Needless to say that these iconoclastic studies were ignored or in some countries even outlawed, and that their authors were ostracized and even imprisoned.

Dr. Kollerstrom, a science historian, has taken these studies, which are in obvious, stark contrast to the widely accepted narrative, as a starting point for his own endeavour into the land of taboo. After he had published a brief paper summarizing what he thought the data forced him to conclude, he was thrown out of his College where he had been a member of staff for eleven years.

In his new book Breaking the Spell, Dr. Kollerstrom shows that “witness statements” supporting the human gas chamber narrative clearly clash with the available scientific data. He juxtaposes the commonly accepted ideas about a Nazi extermination policy toward the Jews with a wide array of mostly unchallenged, but usually unmentioned evidence pointing in a quite different direction:

Dr. Kollerstrom concludes that the history of the Nazi “Holocaust” has been written by the victors with ulterior motives and that this history is distorted, exaggerated and largely wrong. He asserts that this history is, in truth, a great lie that distorts our common perceived reality and misdirects human history to this very day.

With a foreword by Prof. em. Dr. James H. Fetzer

Admitted, we were a little bit behind the curve with this project, Volume 34 of our prestigious series Holocaust Handbooks, but now we finally managed to get it across the finish line: G. Rudolf, E. Böhm, Garrison and Headquarters Orders of the Auschwitz Concentration Camp A large number of all the orders ever issued by…

Castle Hill Publishers proudly announce the publication of the first ever unauthorized biography of Elie Wiesel. It shines the light of truth on this mythomaniac who helped transforming the word “Holocaust” into a brand name: Holocaust High Priest Elie Wiesel, "Night," the Memory Cult, and the Rise of Revisionism By Warren B. Routledge We are…

Castle Hill Publishers’ saga on their books being censored by Amazon, a few weeks ago released as a documentary movie you can watch here, is now also available as an eBook and a print book: The Day Amazon Murdered History The Book to the Movie By Germar Rudolf Amazon is the world’s biggest book retailer….

How long does it take Amazon to ban a book they hate? We tested it. On April 16, 2021, a new book of ours was put into international distribution, and on the same day it also showed up on Amazon.com for sale – until yesterday, April 30, 2021, when the page was removed. So here…