Long out of print, this revisionist classic, a deconstruction of the “Auschwitz Myth,” is finally available again – in a new, slightly revised and corrected edition. A review on Amazon says about it: “Now this book is a breath of fresh air on the subject of the Holocaust! Devoid of emotionalism and clinical in its investigative style. Staeglich employs all his judicial expertise to strip away the falsehoods that distort the truth of this historic event. […] I recommend this to anyone wishing to truly understand.”

A Judge Looks at the Evidence 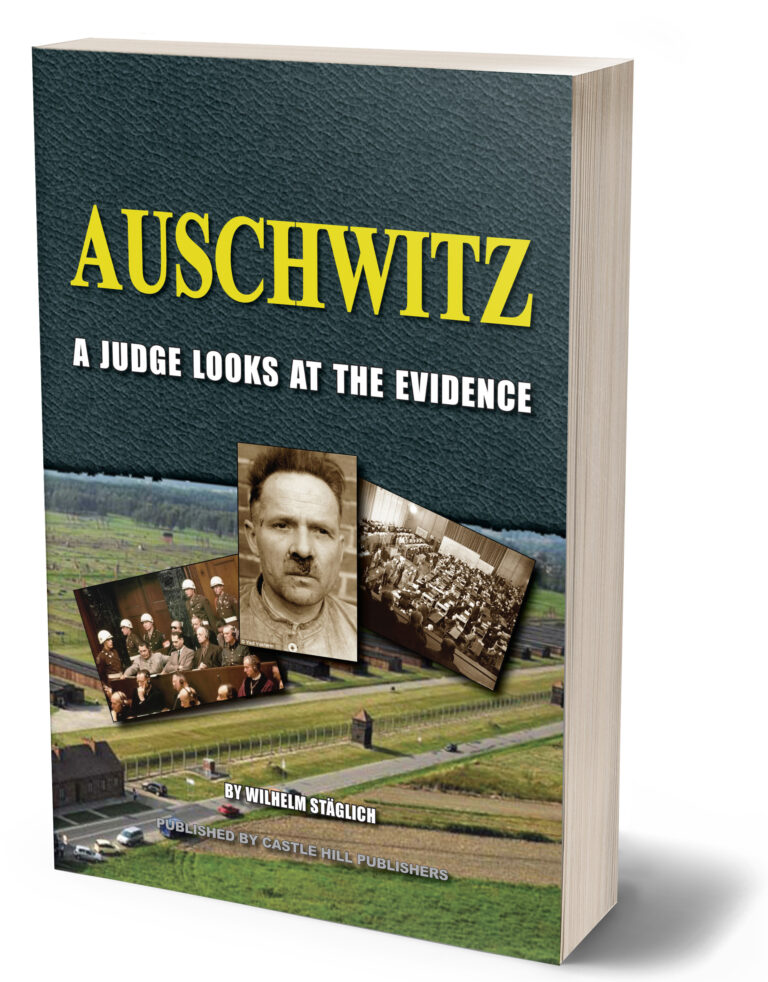 3rd, corrected edition, with a foreword and epilogue by Germar Rudolf, February 2015

Auschwitz is the epicenter of the Holocaust. There is no place on earth where more people are said to have been murdered than at Auschwitz. At this detention camp the industrialized mass murder of the Jews by Nazi Germany reached its demonic pinnacle.

This narrative is based on a wide range of evidence, the most important of which was presented during two trials whose findings form the foundation of our present image of Auschwitz: the International Military Tribunal of 1945-1946 in Nuremberg, Germany, and the German Auschwitz Trial of 1963-1965 in Frankfurt.

When we dig deeper into the rulings of these trials and the actual evidence they are based upon, however, the story looks quite differently.

The late Wilhelm Stäglich, until the mid-1970s a German judge, has so far been the only legal expert to critically analyze the foundations of what we today think we know about Auschwitz. His research results, as presented in this book, leave the reader at times breathless when confronted with the incredibly scandalous way in which the Allied victors and later the German judicial authorities bent and broke the law in order to come to politically foregone conclusions. Stäglich also exposes the shockingly superficial way in which historians are dealing with the many incongruities and discrepancies of the historical record.

The present study is an eye-opener for all those who think that the Auschwitz Holocaust has been proved beyond doubt – either during these legal proceedings or by any other means.

This new edition is corrected and slightly revised. It contains a foreword by the editor pointing the curious reader to more recent research results, as well as an epilogue describing the persecution suffered by the author for his peaceful dissent after his book was first published in Germany in 1979 – and then confiscated and burned by the authorities.

As announced in our Christmas circular, we are pround to release today (a few hours before the end of 2020!) Carlo Mattogno’s latest accomplishment, Rudolf Reder versus Kurt Gerstein: Two False Testimonies on the Bełżec Camp Analyzed, which is Volume 43 of our prestigious series Holocaust Handbooks: C. Mattogno: Rudolf Reder versus Kurt Gerstein: Two…

After Hitler on the Jews and The Jewish Hand in the World Wars, Thomas Dalton has now released his third book of that topic, this one focusing on the Third Reich’s so-called mastermind. Please also consider our current special offers. New Item T. Dalton: Goebbels on the Jews Goebbels kept a near-daily diary and wrote…