In 2009, CHP’s imprint Theses & Dissertations Press managed to publish the philo-revisionist book Debating the Holocaust: A New Look at Both Sides written by a professor teaching at a US university. To protect his career, this professor chose the pen name Dr. Thomas Dalton. He has since written a number of revisionist papers, and in 2010 even helped updating Rudolf’s encyclopedic Lectures on the Holocaust.

Now Castle Hill Publishers proudly announces that Dalton’s book has been thoroughly updated and published in an expanded second edition as part of our prestigious series Holocaust Handbooks:

A New Look at Both Sides 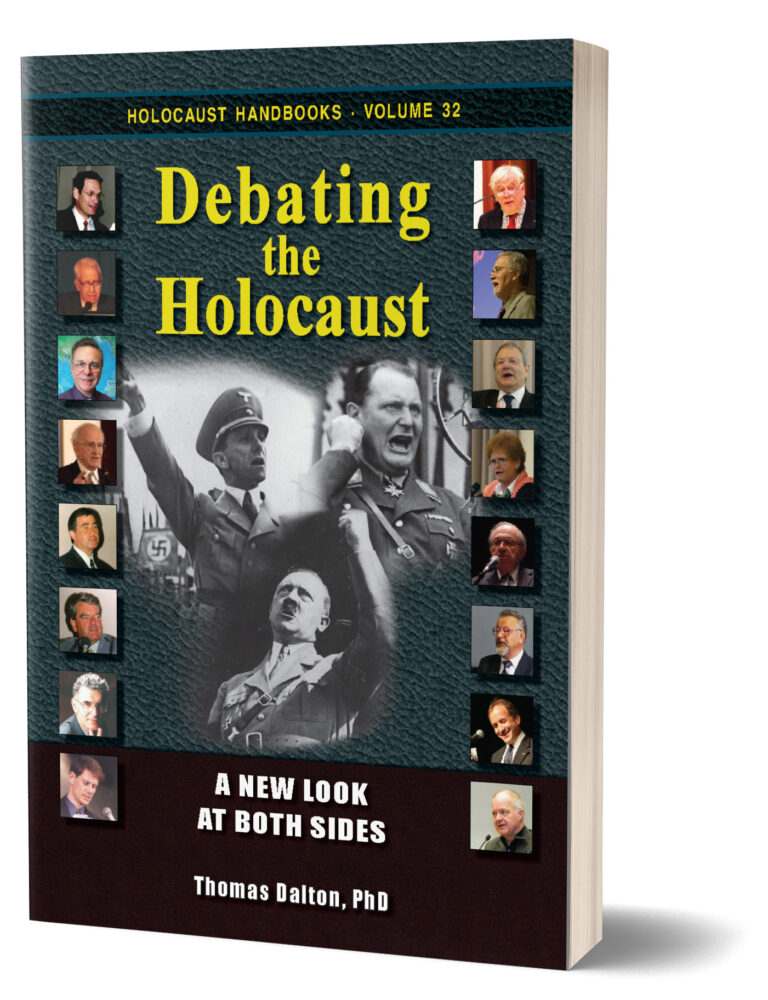 For the past few decades there has been raging a kind of subterranean debate, one of monumental importance. It is a debate about the Holocaust – not whether or not it “happened” (this is a meaningless claim), but rather, how it happened, through what means, and to what extent. On the one hand we have the traditional, orthodox view: the six million Jewish casualties, the gas chambers, the cremation ovens and mass graves. On the other hand there is a small, renegade band of writers and researchers who refuse to accept large parts of this story. These revisionists, as they call themselves, present counter-evidence and ask tough questions. Among the issues they raise are these:

The revisionists arrive at a different account. Hitler, they say, wanted to expel the Jews, not kill them. The ghettos and concentration camps served primarily for ethnic cleansing and forced labor, not mass murder. The Zyklon gas chambers did in fact exist, but were used for delousing and sanitary purposes. And most important, the Jewish death toll was much lower than commonly assumed – on the order of 500,000.

In this book, for the FIRST TIME EVER, the reader can now judge for himself. Arguments and counter-arguments for both sides are presented, and all relevant facts are laid out in a clear and concise manner. The entire debate is presented in a scholarly and non-polemical fashion. Citations are marked, and facts are checked. READ, and JUDGE FOR YOURSELF.

Castle Hill Publishers are proud to announce the publication of Udo Walendy’s classic work on the outbreak of World War II in a newly translated and slightly revised edition: Who Started World War II Truth for a War-Torn World By Udo Walendy Nowadays the Second World War is frequently called the Mother of All Wars,…

Castle Hill Publishers’ saga on their books being censored by Amazon, a few weeks ago released as a documentary movie you can watch here, is now also available as an eBook and a print book: The Day Amazon Murdered History The Book to the Movie By Germar Rudolf Amazon is the world’s biggest book retailer….

Commandant of Auschwitz Rudolf Höss, His Torture and His Forced Confessions By Rudolf Höss and Carlo Mattogno From 1940 to 1943, Rudolf Höss was the commandant of the infamous Auschwitz Camp. Today’s orthodox narrative has it that during this time some 500,000 people were murdered in that camp. Yet when Höss was captured after the…

Michael Shermer, a professor for the history of science, has crossed intellectual swords with revisionists since 1994, when he dedicated the major part of an issue of his Skeptic Magazine to discussing, “Who Says the Holocaust Never Happened? And Why Do They Say It?,” the issue’s subtitle, which is also the subtitle of the book…