Once upon a time, a father and his son set out in shining armor to slay the wicked dragon, that is to say, to once and for all refute those evil Holocaust deniers… They wrote a book which appeared in print on July 15, 2016. On that very same day, July 15, 2016 (today), the revisionist rebuttal appeared as well (because their book had been available already since late April on Kindle, so we got a head start). Hence, their mighty fleet of revisionist-slaying arguments got sunk right there in the harbor before it could even go to war…: 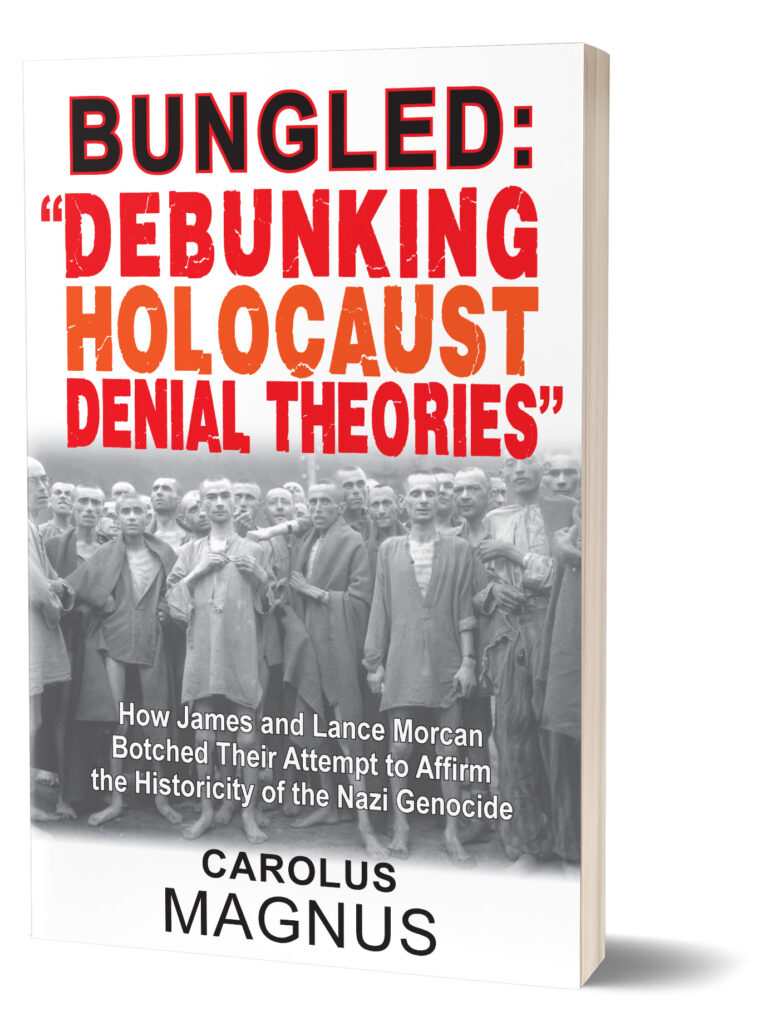 The novelists and movie-makers James and Lance Morcan have produced a book “to end [Holocaust] denial once and for all.” To do this, “no stone was left unturned” to verify historical assertions by presenting “a wide array of sources” meant “to shut down the debate deniers wish to create. One by one, the various arguments Holocaust deniers use to try to discredit wartime records are carefully scrutinized and then systematically disproven.” They headlined the book Debunking Holocaust Denial Theories.

Unfortunately, it’s a grand feint, and the present study proves it. First, the Morcans did not address revisionist arguments at all. In fact, they completely ignored the vast amount of recent scholarly studies published by revisionists; they didn’t even identify them. Instead, they engaged in shadowboxing, creating some imaginary, bogus “revisionist” scarecrow – a mélange of distorted or completely invented alleged “denier” arguments – which they then tore to pieces. In addition, their knowledge even of their own side’s source material was dismal, and the way they backed up their misleading or false claims was pitifully inadequate.

After a year of hard work of translating and trans-editing, Carlo Mattogno’s new, 830-page Überwerk on the Einsatzgruppen, Volume 39 of our prestigious series Holocaust Handbooks, is finally available: The Einsatzgruppen in the Occupied Eastern Territories Genesis, Missions and Actions Carlo Mattogno On 22 June 1941, National-Socialist Germany set out to destroy what it saw…

Castle Hill Publishers recently released new editions of two books of the series Holocaust Handbooks: Special Treatment in Auschwitz, 2nd ed., by C. Mattogno Auschwitz Lies, 3rd ed., by G. Rudolf and C. Mattogno Plus at a 53% discount: Auschwitz Lies, 2nd ed. Click on the above link to visit this book’s page in our…