Dr. Deborah Lipstadt, professor of Jewish and Holocaust History, is in the news again. The so-to-be-release movie Denial retells how she won a court battle against British historian David Irving who had sued her for libel, allegedly committed with her 1993 book Denying the Holocaust. Almost simultaneously, both this book as well as Lipstadt’s 2005 book Holocaust History on Trial about that libel trial, upon which the movie is based, are about to be issued in new editions. It is a publicity war against Holocaust revisionism.
CODOH and Castle Hill Publishers, the world’s leading outlets for quality material on Holocaust revisionism, have decided to accept this challenge. We will start releasing our own books, movies and articles on this issue over the next several months.
And here is the first: Lipstadt’s 1993 book, which started the entire chain of events leading to this new movie, has been critically reviewed by revisionists before, but only in brief articles addressing a mere few issues (see e.g. the reviews by Ted O’Keefe’s, John Anderson, Anthony O. Oluwatoyin, Charles E. Weber and Carlo Mattogno,). No one has ever bothered taking on the whole book, analyzing it from cover to cover, exposing its many flaws. That’s where we thought things have to start. Hence here it is: 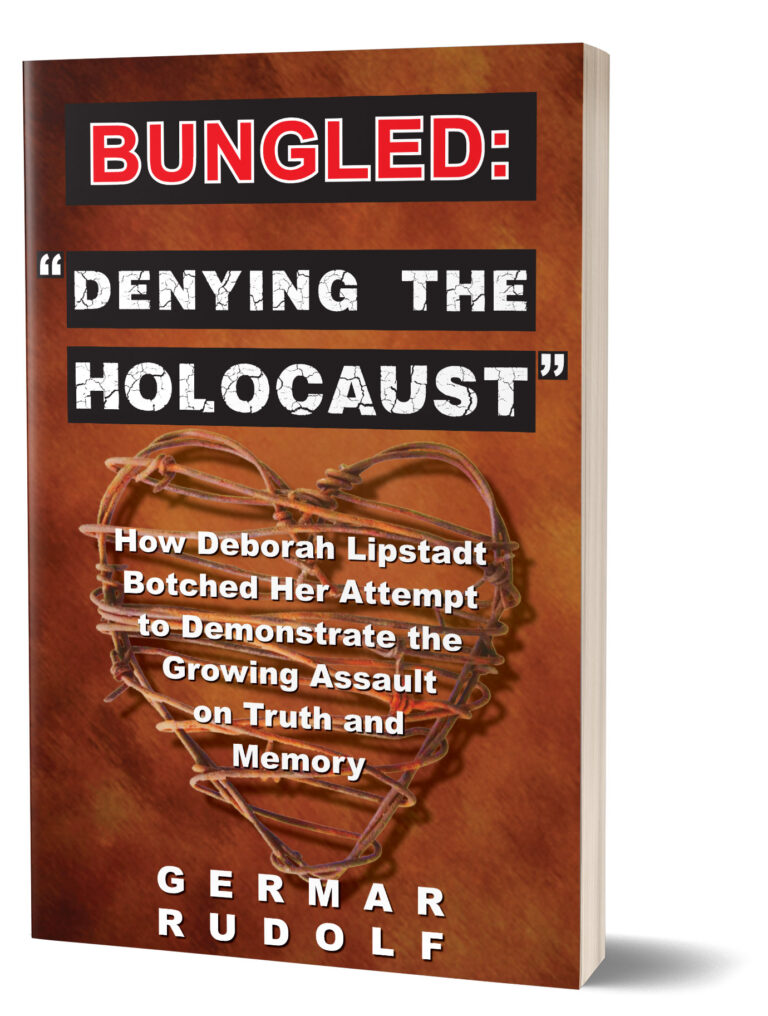 With her book Denying the Holocaust, which is scheduled to be re-published in December 2016, Deborah Lipstadt tried to show the flawed methods and extremist motives of “Holocaust deniers,” who, so the book’s description claims, have “no more credibility than the assertion that the earth is flat.”

Backed up with hundreds of references to thoroughly researched studies, the present book demonstrates that Dr. Lipstadt clearly has neither understood what the principles and methods of science and scholarship are, nor has she any clue about the historical topics she is writing about. She misquotes, mistranslates, misrepresents, misinterprets, and makes a plethora of wild claims without backing them up with anything. Among other things, she utterly fails to use generally recognized standards of evidence. Given the way she handles documents and data, it is clear that she has no interest in scholarship or reason. In fact, truth has been the antithesis of her enterprise.

Rather than dealing thoroughly with factual arguments, Lipstadt’s book is full of ad hominem attacks on her opponents. It is an exercise in anti-intellectual pseudo-scientific arguments, an exhibition of ideological radicalism that rejects anything which contradicts its preset conclusions.

Since she admits herself that her opponents’ motives are irrelevant, as an inescapable consequence, so is her book.

A little more than three year after the first edition of this massive work on the Einsatzgruppen was published in late 2018, a new, slightly revised edition is launched. The corrections are minor, so for those who already own the first edition, getting a copy of this new edition may not be worth the expense,…

Once upon a time, a father and his son set out in shining armor to slay the wicked dragon, that is to say, to once and for all refute those evil Holocaust deniers… They wrote a book which appeared in print on July 15, 2016. On that very same day, July 15, 2016 (today), the…

After having released the German edition of Mattogno’s trailblazing work on the orthodoxy’s extermination claims about Auschwitz, we have now updated the English edition, and released it in its 3rd, revised and corrected edition (Volume 22 of our prestigious series Holocaust Handbooks): Patrons who have placed orders for this book already will receive it in…

Castle Hill Publishers recently released new editions of two books of the series Holocaust Handbooks: Special Treatment in Auschwitz, 2nd ed., by C. Mattogno Auschwitz Lies, 3rd ed., by G. Rudolf and C. Mattogno Plus at a 53% discount: Auschwitz Lies, 2nd ed. Click on the above link to visit this book’s page in our…

Castle Hill Publishers are proud to announce the publication of Udo Walendy’s classic work on the outbreak of World War II in a newly translated and slightly revised edition: Who Started World War II Truth for a War-Torn World By Udo Walendy Nowadays the Second World War is frequently called the Mother of All Wars,…