The Auschwitz Camp had sickbays and hospitals where thousands of inmates were cured. Since late 1942, the camp authorities, foremost the garrison physician Dr. Wirths, tried with all conceivable means to keep the Auschwitz inmates alive and healthy. This new book from Castle Hill Publishers is full of irrefutable documentary evidence for that: 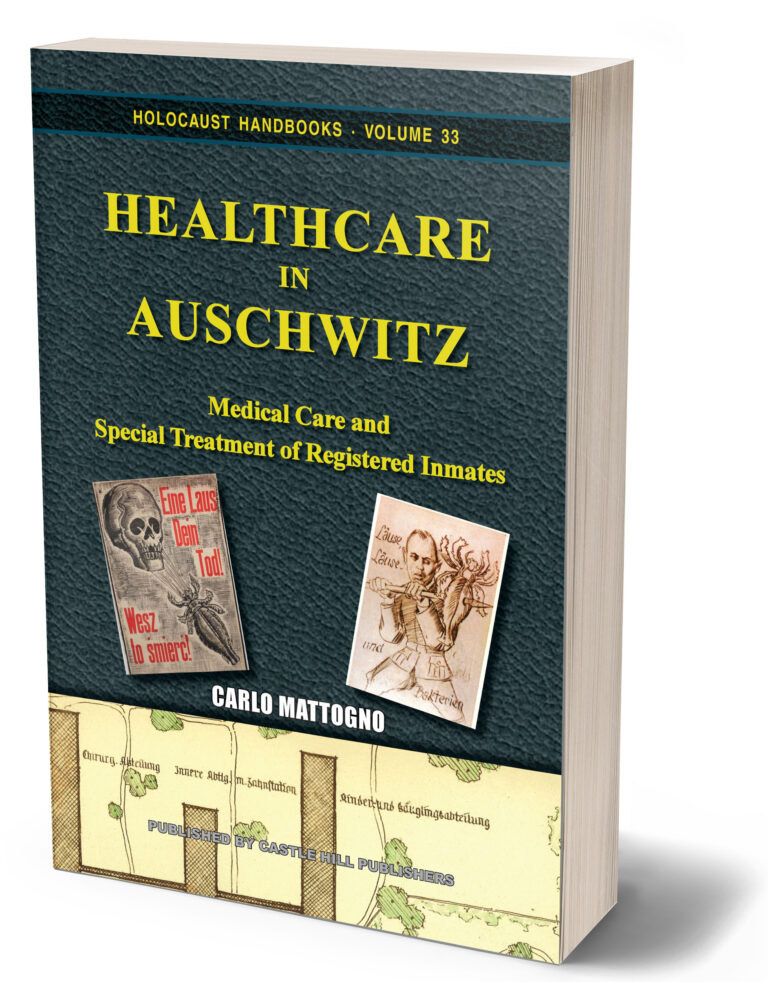 The famous Italian Holocaust survivor Primo Levi informed us in his eyewitness account Survival in Auschwitz that a number of sickbays and infirmaries etc. existed in the area of the Auschwitz camp. The present book gives an overview of the camp’s organizational and historical development in this regard. For example, there was a change of policy among Himmler and his entourage toward the end of 1942 regarding the main function of Germany’s concentration camps. While initially reeducation and punishment were their main focus, exploiting the inmates’ productive potential became increasingly important later on. The main reason for this was the ever-increasing needs of the German armed forces for manpower. Another reason for the installation of sanitary facilities were epidemics which emerged repeatedly for a number of reasons and which had to be combatted.

In the first part of this book, the author analyzes the inmates’ living conditions as well as the various sanitary and medical measures implemented to maintain or restore the inmates’ health.

The second part explores what happened in particular to those inmates registered at Auschwitz who were “selected” or subject to “special treatment” while disabled or sick. The comprehensive documentation presented shows clearly that everything was tried to cure these inmates, especially under the aegis of Garrison Physician Dr. Wirths.

The last part of this book is dedicated to the remarkable personality of Dr. Wirths, the Auschwitz garrison physician since 1942. His reality refutes the current stereotype of SS officers. In this context, the statements by the former communist concentration camp survivor Hermann Langbein are particularly revealing.

After 3 years of editing, peer-reviewing, revising, correcting, proofing, frequently interrupted and relegated to the back row by other, more urgent projects, Carlo Mattogno’s Opus Magnum is finally available: The Cremation Furnaces of Auschwitz—an exhaustive technical study of cremation technology in general and of the cremation furnaces used at Auschwitz and Birkenau in particular: The…

Castle Hill Publishers are proud to present the all-new, completely revised, most up-to-date and fully comprehensive coverage of the revisionist cause against the orthodox Holocaust narrative ever. 600 pages of cutting-edge revisionism written in a riveting style: Lectures on the Holocaust Controversial Issues Cross-Examined By Germar Rudolf What? 600 pages of dense, mesmerizing information for…

Dr. Deborah Lipstadt, professor of Jewish and Holocaust History, is in the news again. The so-to-be-release movie Denial retells how she won a court battle against British historian David Irving who had sued her for libel, allegedly committed with her 1993 book Denying the Holocaust. Almost simultaneously, both this book as well as Lipstadt’s 2005…