A few months after the release of Carlo Mattogno’s thorough critique of the various postwar “confessions” by former Auschwitz Camp Commandant Rudolf Höss, we are proud to present his next devastating critique of the statements made by yet another key witness: Miklós Nyiszli. Carlo’s deconstruction of Nyiszli leaves no stone unturned, and no stone standing: 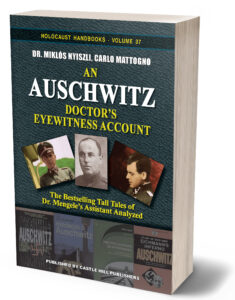 By Carlo Mattogno and Miklós Nyiszli

Everyone knows Dr. Josef Mengele, the evil Auschwitz doctor who sent countless Jews to the gas chambers, performed cruel, pointless medical experiments on inmates, and gave twin research a bad reputation. But how do we “know” about his many diabolical deeds?

The most important source for what Mengele is said to have done at Auschwitz comes from the Hungarian Jew Miklós Nyiszli, a forensic physician who claims to have been Dr. Mengele’s assistant at Auschwitz. In 1946, he published a book about his traumatic experiences while he was at Auschwitz. Over the years, his book has been translated into all major languages of Europe. It has become one of the mainstays of the orthodox Auschwitz narrative, right next to the testimonies of other key witnesses, such as that of the former Auschwitz commandant Rudolf Höss, or of Elie Wiesel.

As influential as Nyiszli’s book has been in forming the world’s opinion about Auschwitz, Nyiszli’s various writings have never been subjected to thorough critical scrutiny. The present book changes this.

Part 1 of this book contains a faithful translation of the original 1946 edition of Nyiszli’s Hungarian book, while Part 2 makes publicly accessible for the first time essential excerpts of much-less known postwar texts by and about Nyiszli.

Part 3 thoroughly scrutinizes Nyiszli’s writings with what we know to be true about Auschwitz from solid material facts and authentic documentation, while Part 4 compares his various claims with what other inmate doctors have stated who were in a similar position at Auschwitz as Nyiszli claims for himself.

Part 5 takes a critical look into how orthodox historians have dealt with Nyiszli’s texts, while a short essay in the Appendix lays bare the mythical nature of the cliché of Dr. Mengele as the “Angel of Death.”

The author’s conclusion is dispositive:

“Nyiszli was either an extraordinary impostor or a lunatic; there is no escaping from the dilemma. And both horns of this dilemma – shameless mendacity or lunacy – disqualify Nyiszli and completely destroy his credibility.”

One of Castle Hill Publishers’ bestselling books just got even better: Don Heddesheimer’s The First Holocaust is now available in a third, corrected edition, expanded by an epilogue giving a research update and a list of more than 270 pre-Nuremberg sources talking of 6 million suffering, dying or dead Jews: The First Holocaust The Surprising…

Back in 2017, Amazon banned a wide range of revisionist books from its Amazon.com, ~.co.uk, ~.de, ~.es, ~.fr etc. book-selling websites. Among them was also a book that had been out of print for decades and was only rarely (and expensively) available as used copies, if at all: Barbara Kulaszka’s epic tome on the second…

When John Ball’s Air Photo Evidence appeared in 1992, it changed the field of Holocaust research forever. “Nothing is hidden from air photos,” as Ball put it aptly – neither the crimes of the Germans nor the lies of the victors, so to say. Already in 2003 John Ball started working with Castle Hill Publishers…