After a year of hard work of translating and trans-editing, Carlo Mattogno’s new, 830-page Überwerk on the Einsatzgruppen, Volume 39 of our prestigious series Holocaust Handbooks, is finally available:

The Einsatzgruppen in the Occupied Eastern Territories 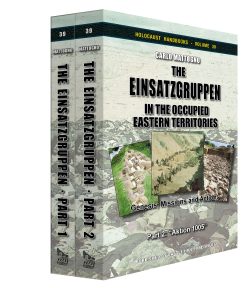 On 22 June 1941, National-Socialist Germany set out to destroy what it saw as a menace to the world: Judeo-Bolshevism in its most threatening manifestation, the Soviet Union. As the German Army marched east, certain special units called Einsatzgruppen (task forces) were deployed behind the front. Mainstream historians maintain that their primary task was to exterminate as many Jews as possible. At war’s end, the Einsatzgruppen’s death toll and that of associated units is said to have amounted to some 1.5 to 3 million Jewish civilians, depending on which historian you happen to hear.

The present study takes a critical look at the Einsatzgruppen’s activities and missions. While many authentic documents exist attesting to mass executions of Jews in the temporarily German-occupied Soviet territories, the accuracy of the data contained in them is questionable, as even mainstream scholars admit.

The present book tries to uncover what really happened to the Jews who lived in, or were deported into, the temporarily German-occupied territories of the Soviet Union. It first shows that the Einsatzgruppen were not simple killing units but had a broad variety of responsibilities. It then establishes that there is not a shred of evidence indicating that these units ever received orders to commit wholesale slaughter of Jews. In fact, there is abundant evidence refuting such a claim. The extant documentation instead points to the Jews having been targeted by the Germans as the fertile breeding ground of Bolshevism, hence as a convenient scapegoat for the atrocious way the Soviets waged this war.

Next, and unlike all other works published so far on this topic, the author analyzes with a critical mind and a common-sense approach the information we have about the Einsatzgruppen’s killings as well as the claimed attempts of German units to erase the traces of these crimes in what has been dubbed “Aktion 1005”: the exhumation and incineration of the murdered victims in 1943/1944. Almost everything known about “Aktion 1005” stems from Soviet investigations conducted after the Germans’ retreat. Their witness testimonies and forensic expert reports, however, reek of atrocity propaganda marked by absurdly impossible and often contradictory claims.

The only way of determining any more about what really happened would be the forensic examination, by independent researchers, of the physical traces left behind. Unfortunately, such research has been prevented by the powers that be.

Castle Hill Publishers are proud to present the all-new, completely revised, most up-to-date and fully comprehensive coverage of the revisionist cause against the orthodox Holocaust narrative ever. 600 pages of cutting-edge revisionism written in a riveting style: Lectures on the Holocaust   Controversial Issues Cross-Examined By Germar Rudolf What? 600 pages of dense, mesmerizing information… 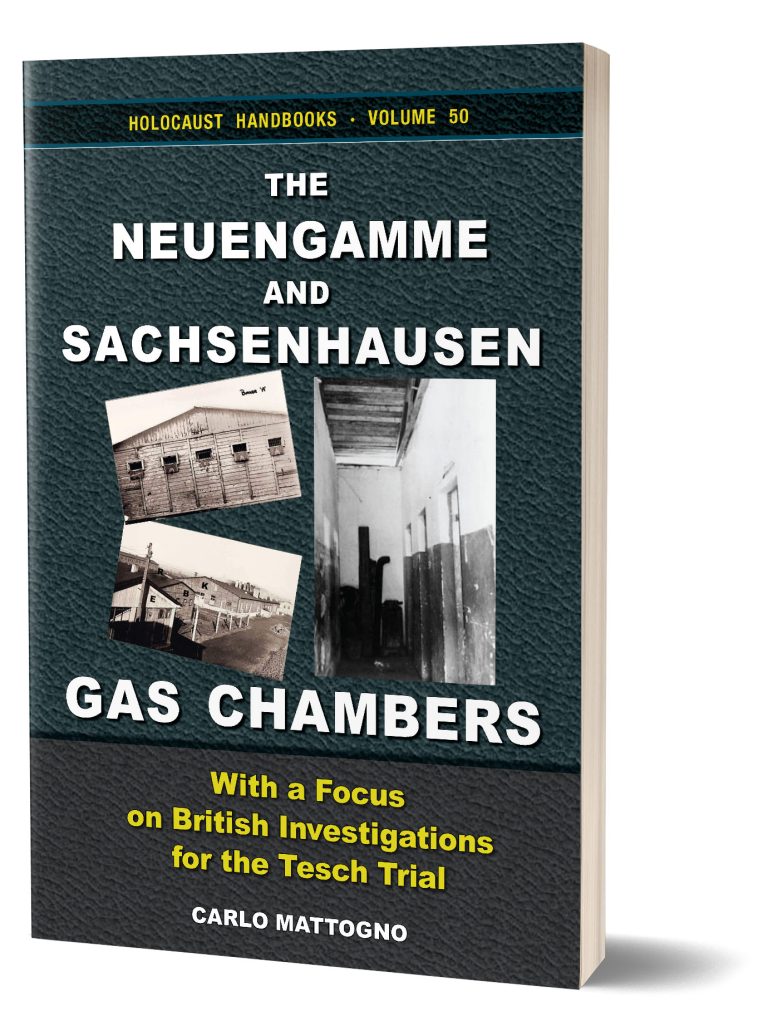 Party Time! Our prestigious series Holocaust Handbooks has reached fifty volumes! Yeehaaawww! The indefatigable Carlo Mattogno sets his intellectual charges to two more gas-chamber myths and blows them to smithereens: Holocaust Handbooks, Volume 50: The Neuengamme and Sachsenhausen Gas Chambers: With a Focus on British Investigations for the Tesch Trial The evaluation of many interrogation…

After one of our dedicated volunteers has been slogging through a messy OCR output for more than half a year, cleaning up more than 5,000 pages full of “cockroaches”, we finally managed to release, just one hour ago, the printed version of the court transcript from the First Zündel Trial. Now everyone can read —…