Castle Hill Publishers is the doing-business-as name of CastleHill Publishing LLC, a non-disregarded single-member limited-liability company. We are dedicated to offering the kind of books and videos which others don’t dare touch – provided these items do not advocate, promote, approve of, condone or justify the violation of the civil rights of others, and they do not serve to exploit a crime financially. We therefore specialize in particular on the publication and dissemination of mainly scholarly-historical books and documentaries which can no longer be published or distributed in many countries of the world, be it due to government or corporate censorship.

Please enjoy our extraordinary range of books and videos!

Watch the following video to learn why Freedom of Speech is important:

Here is our take on this crucial topic:

Until Amazon closed our Market Place account around Christmas 2015 for allegedly not fulfilling incoming orders swiftly enough, our customers there gave us the following average rating (as of Dec. 6, 2015): 5.0 stars over the past 12 months, with not a single complaint about anything (let alone delayed order processing). Here are some voices:

Castle Hill Publishers were established by Germar Rudolf. Since December 1996, Germar Rudolf has been active as a publisher in England. Until early 1998, Rudolf pursued this activity initially under the umbrella of the former Belgian foundation Vrij Historisch Onderzoek, VHO (free historical research), which was dissolved in 2013. 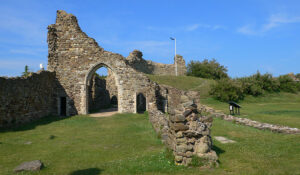 In early 1998, Germar Rudolf established his own company Castle Hill Publishers (CHP) in the south-eastern English town of Hastings. The company’s imprint logo that can be found in its books is a rendering of the ruins of Hastings Castle (see the photo to the right).

In early 2013, CHP and the Committee for Open Debate on the Holocaust (CODOH) joined forces in their common goal. One of the results of this close cooperation was the relocation of the CHP online bookstore to the CODOH website. After CODOH was reorganized into a charitable trust in late 2014, Castle Hill Publishers and CODOH entered into a mutually beneficial agreement to support each others’ activities. Since then, CODOH has been selling CHP’s products through its online shop, and has been promoting these products using its various venues.

After the UK left the European Union in early 2021, mailing dissident merchandise from the UK to EU countries has become financially and legally untenable. As a consequence, CHP was sold in April 2022 to CODOH, which has reorganized it as a limited-liability company under the name CastleHill Publishing LLC.